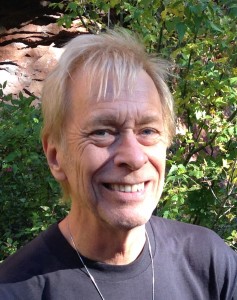 The first inkling Glenn had that the human body was okay – really okay – was upon reading Walt Whitman’s Leaves of Grass in the late 60’s.  This ah-ha moment led to his enduring passion for exploring and sharing all the ways that the body itself is sacred.

Whether it was busking on Royal Street in New Orleans, practicing yoga in the mountains of California , or home-schooling his four children, he has consistently focused on resolving the apparent dilemma of the body/mind split. Is there actually such a split?  How does one come into harmony with one’s own sacred energy of Life and “sing the body electric“?

Years of practice in Re-Evaluation Counseling and Tai-Chi, mentoring at-risk teens, and facilitating men’s groups led to his realization that we are all culturally conditioned to “forget” our natural state of abundant freedom and pleasure.  In his view, most of us are only vaguely aware of our innate Life Energy, sensing it merely as a need to release sexual pressure, and we settle for the momentary conventional orgasm, or the “genital sneeze”, as he calls it.

Early studies in Tantra with Adi Da Samraj and Franz Bakker eventually led him to the work of Margot Anand.  He was immediately moved by her practical system of heightening and integrating the consciousness of the whole body.  Her many exercises of conducting sexual Life energy throughout all of the body’s energy centers especially inspired him, and he became a teacher-in-training with her in 2006.  He continues to teach in her style of Sky-Dancing Tantra, and also incorporates years of study with well-known teacher/authors Francoise Ginsberg, Baba Dez and Laurie Handlers, among others.

Glenn’s contagious enthusiasm, encyclopedic wisdom and unique style of offering relationship itself as a way of teaching mark him as a leader to watch. With his life-partner and co-facilitator Diana Owens, Glenn brings a depth of historical understanding, physiological knowledge, and scientific method to their Tantra events, perfectly complementing Diana’s feeling-oriented and exuberant approach to teaching.

Glenn is a licensed massage therapist, faux-finish artist, and occasional ghost writer in Phoenix Arizona. He’s raised four healthy adult children, learned innumerable ways to transcend the ego (none of which work with any reliability), and enjoys performing and creating music with friends throughout the United States and Canada. When he’s not writing songs about about the “Great Mystery” and the paradox of living an indefinite life span, he volunteers as a massage guy at a day-center for the mentally disabled.

“If somebody asks you what you do for a living, tell them you laugh for a living.”  – Bob Dylan

“Jack of all trades and master of four or five, Glenn is one of those rare, indispensable men who refuse to confine themselves to a single academic pigeon-hole, but with systematic restlessness and a boundless curiosity climb about on the woodwork between the specialists’ insulated boxes, peering in now here, now there, and correlating the knowledge they extract from each compartment into a comprehensive pattern that permits a better understanding of the artificially isolated facts and, along with a better understanding, the possibility of new and more fruitful kinds of action.”
– Aldous Huxley on Glenn Salzman

Lovingway news, events and updates, delivered to your inbox.
> subscribe